Description
Eleanor Kate Sperrey arrived in New Zealand with her family in 1863. She attended Otago Girls High School, where one of her art teachers was William Hodgkins, father of acclaimed artist Frances Hodgkins. At the age of 17 she was the youngest artist member exhibiting at the Otago Art Society and in the same year, 1879 she had two works accepted for exhibition in Melbourne.

When Sperrey was 18, the family moved to Wellington as a result of her father’s appointment as Commissioner of Taxes. She was perhaps only the second New Zealand artist to study professionally overseas, going to Melbourne in 1881 and then to Rome. No small feat for a single woman. In 1885 she returned from Italy, set up an office and became an official portrait artist, joining the New Zealand Art Students' Association. The Auckland-based organization encouraged members to solely paint subjects having to do with New Zealand. In 1886, she moved her studio to Lambton Quay, Wellington. Sperrey exhibited widely across New Zealand and Australia to much acclaim.

A highly regarded artist, Sperrey was commissioned to paint portraits of the Prime Minister and many statesmen. This included one of the most celebrated male figures of her day, Captain Gilbert Mair and in 1888 they married. Sperrey continued painting, signing her works as E. K. Mair. Captain Mair had recently been appointed as Māori Interpreter to the House of Representatives. Meeting him broadened Kate’s experience of Māori life and she began to portray contemporary Māori in her work. Her portraits of Māori women and children were highly praised. Critics admired her skill at life drawing, her fresh and bold modern painting technique, and her ability to capture the colour of Māori skin.

A self-portrait drawn in 1887 shows her to be a slim woman with dark curly hair. She was described as intelligent, well-travelled and a good conversationalist. However, she was often ill, and died on 23 April 1893 aged 31, following an operation. She is buried in Bolton Street Cemetery next to her father. At the time of her death she was known widely as 'one of the best portrait painters New Zealand has produced’. That she has since been virtually forgotten says less about her abilities than it does about the selective focus of New Zealand art history. 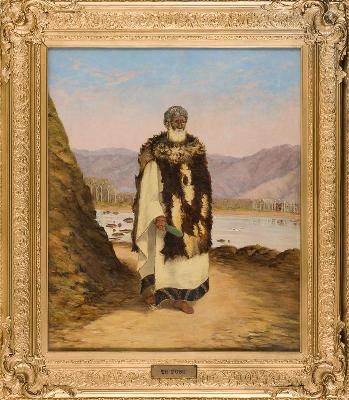 Wellington City Council has permission from the copyright owners to use the images. You may not make copies, reproduce, sell or distribute these images. Apply to the copyright holder directly for permission.